​BACKGROUND INFORMATION
Before the advent of colonialism, the Kissi people were living in their kingdom, which is the present day Makona River Basin in West Africa (as circled on the map). During the colonial period, Sierra Leone was ruled by the British, Guinea by the French and Liberia by the Americans.  Due to its location, the Makona River Basin is far from the various capital cities of the three countries, making it one of the remote regions in the three nations. 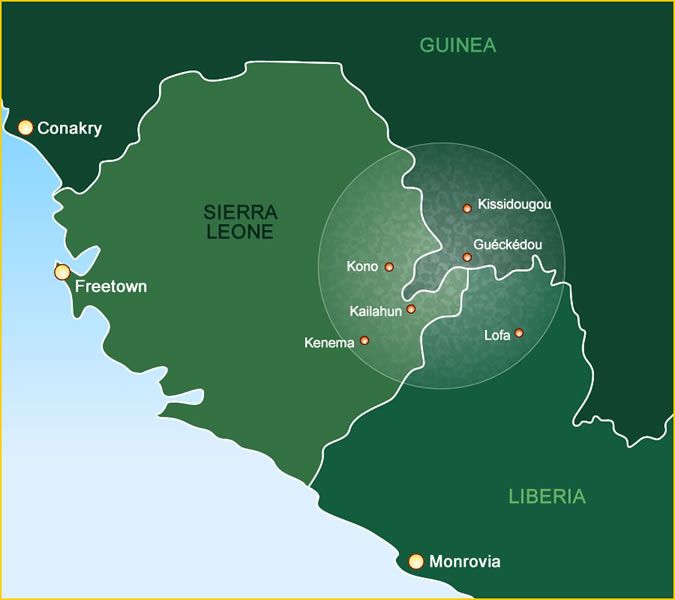 The Makona (Moa) River remains a strategic geographical symbol between the Republic of Sierra Leone in the East, Liberia North West and Guinea South East.

In Sierra Leone the Kissis are mainly found in Kailahun and Kono districts but also scattered in Kenema, Bo, Koinadugu and Freetown. In Guinea, they are located in Guéckédou, Kissidougou and part of Masanta regions.  In Liberia, they are densely populated in Foya District, Golahun and Monrovia.

The Kissi language, traditional and cultural beliefs remain the common interests of the people, binding them together as indigenes of West Africa regardless of the geographical boundaries. Naming children among the Kissi tribe is quite an interesting one as the names are already in existence before the children are born. The names of children are given according to positions of their birth. Some of the male names are: Sahr, Tamba, Fayia, Fallah etc. and the female names are: Sia, Kumba, Finda etc.

Something very interesting and different from other tribes in either Guinea, Sierra Leone or Liberia is how family names are chosen.  The general practice before now was that the surnames of children in these countries were often the last or surnames of their fathers. Children born to Kissi parents on the other hand used the first names of their parents as their surnames. This meant that if first child was born to Sahr Fallah for instance, that child would be called Sahr or Sia Sahr. If however, the child’s father was not in the picture, they would carry the first name of their mother. That was why the last name of some children had been female names like Kumba Ndambi. With the introduction of formal education or western civilization, this interesting legacy has slowly faced away. In some cases, children may carry their villages or towns as their surnames. People often carry surnames like Sandounor, Fangamadounor, Kamanor etc.

This ethnic group is highly innovative and recognized for producing the KISSI PENNY, an iron money that was used widely in West and even Central Africa as a medium of exchange that replaced the Barta System.  In addition, while other ethnic groups were using animal skins as clothes before the white-man’s clothes started arriving in West Africa, the Kissi People produced their own clothes, THE KISSI COUNTRY CLOTH which was most admired by H. M. Queen Elizabeth during her visit to Sierra Leone in 1964.  Hence history holds it that the kissi people were the only ethnic group in West Africa that was able to produce their own money, the KISSI PENNY and the kissi Country Clothe. Religion has changed our people from being idol worshipers to believers in Jesus as Christians or followers of Islam.

As the Kissis are mostly found in the fertile rain forest region of the Manor River basin, they are primarily subsistence farmers growing rice, tubers like cassava and sweet potatoes. Crops such as coffee, cocoa, and oil palm are some of the cash crops grown by Kissi farmers. Livestock such as goats, sheep, and cows are reared on a minimal scale in the region. The various forms of farming in the Kissi region are generally a male dominated one and the women on the other hand are often responsible for vegetable gardening.

Although peaceful and submissive people, the kissis also produced great warriors to defend their territory. Famous among them were Kissi Kaba keita who resisted French conquest in Guinea (1892-1893). He succeeded in uniting many kissi chiefdoms under his reign in Kurankos of Morige, and the Leles of Yombiro but was finally executed in Siguiri.  On the Sierra Leone side was Kai Londo (1845-1885) of Luawa chiefdom, Kailahun district. He joined the famous Mende warrior, Ndawa, in a series of military campaigns.  Kai Londo led an attack against Ndawa and the victory fell on him. He conquered a large territory, built new roads, fortified towns and ruled with wisdom.

In spite of the positive contributions made by Kissi people towards the development of the Sierra Leone economy, the kissi Communities and people have remained underdeveloped, with no proper infrastructure, clinics or hospitals, no potable water, no electricity and no paved roads. A number of kissi school-age children sit on hard cold floors in tents, roofed with palm branches/leaves, that they call schools. There are few trained and qualified teachers in the schools. In addition, there are no modern libraries with IT facilities and no recreational or leisure centers. Teenage pregnancy as well as maternal and child mortality rate are on the increase in the Kissi region.

Furthermore, Kissi communities have experienced and still are facing a number of constraints and challenges.  First, they have agricultural potential but remains impoverished and underdeveloped due to the lack of simple modest farming equipment, appropriate tools and motorable roads to transport harvested agricultural products like bananas, oranges, coffee, cocoa, palm oil, cassava, plantains etc. to the nearest markets.  Hence Kissi communities, which sit on fertile land area are yet to fully exploit and utilize their rich natural resources with a view to develop the Kissi communities.

Moreover, Kissi Communities are surrounded by large tribes that are gradually eating into the Kissi culture, tradition, values, language and history….assimilation! Noting the kissi cultural heritage is very rich, unique and it’s dying out.
Another challenge and most worrying,  is that all major developmental, social and economic facilities within the kissi community, particularly within Koindu and Buedu towns, which were trading hubs and also economic basket for Sierra Leone, were seriously affected due to the 11 years’ civil conflict and subsequent EBOLA epidemic.  The Kissi communities amongst others were hard hit and are still struggling to regain their lost opportunities.

Another compounding problem is the absence of Technical and Vocational Education Training (TVET) facilities especially for Kissi youth and Smallholder-farmers to increase their skills for poverty reduction and development including the production of abundant food for the their communities to reduce the high dependency on the importation of major food stuff like rice.

The idea of KISDO started during a ‘’VANICULA RADIO PROGRAMMME” in Freetown where many tribes (Fula, Mende, Temne etc.) used to broadcast in their native languages on Culture Radio 104.5 with Moses Sahr Fayia as one of the moderators.

It was against this background that Mr. Moses Sahr Fayiah (.a.k.a King Ngolie) and other committed and dedicated Kissis and well-wishers started Kissi Bendu Radio Programme in 2011 to create awareness about the problems surrounding the Kissi community. On the 15th June 2016, this Kissi Bendu Radio Programme further established a WhatsApp Group which brought together the Kissi people in Sierra Leone, Guinea, and Liberia, including the diaspora as a whole.

As this social group expanded and attracted more members from all works of life, it was then converted into a Non-Governmental Organization and the name thus changed to Kissi Sustainable Development Organization (KISDO). On the 13th March 2017, the organization gained attestation from the Ministry of social welfare, Gender and Children’s affairs Sierra Leone as a credible community based organization that seeks to promote the well-being of the Kissi people in the basin.

LOCATION:  The organization headquarters is currently located in Freetown with sub branches in Guinea, Liberia, and the diaspora.

MISSION STATEMENT: To foster developmental activities for Kissi community in the Makona Basin in order to enhance sustainable growth and developments.

MEMBERSHIP: it is opened to all those interested by securing a registration form from the organization.  An applicant can become an eligible member after fulfilling all registration requirements.  The categories of members are as follows: Ordinary, Associate, Patrons and Chief Patrons

OWNERSHIP: This organization is a non-profit charitable organization. The organization does not have private owners, and it does not issue stock or pay dividends.  Whiles it earn a surplus, that income can be reinvested in the organization, possibly to benefit or expand programs.